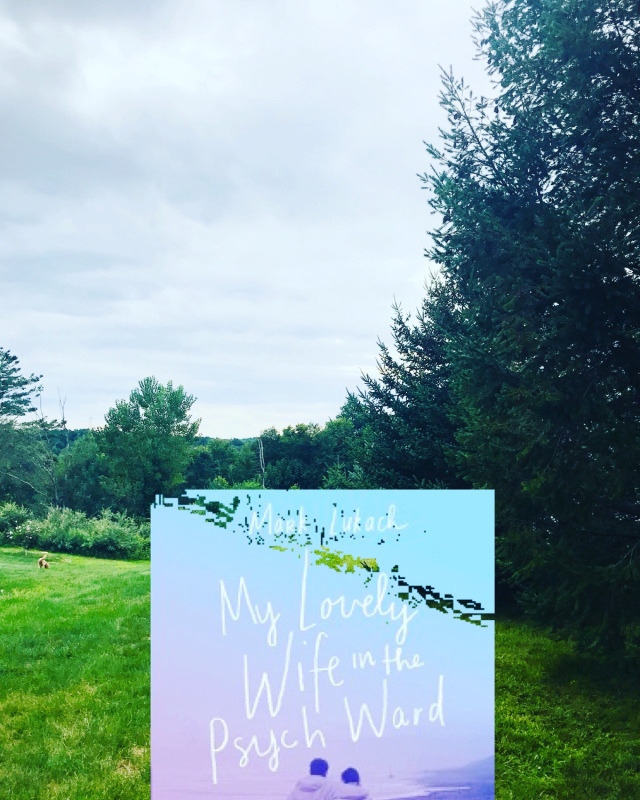 “In fact, maybe love, in the purest sense, is about being kind to someone with no expectation of how they’re going to respond. They can ignore your kindness, reject it, or return it tenfold, but you just continue to be kind, and that is love.”

This was a quick and easy read for me. Something that I could get in and out of several times during the day while juggling my daily responsibilities. Mark Lukach, the author and the narrator of this book, is not a great writer but he writes with honesty and sincerity which I really appreciated.

Mental illness is a complicated subject and it needs to be discussed openly. Mark is doing a favor to humanity by openly sharing his family’s struggle with his wife Guilia’s mental illness and repeated hospitalizations. That said, I have mixed feelings about this book. Mark explains things in such lengthy detail that there really isn’t much left for the reader to ponder on their own. At the same time, Mark also does not make much effort to familiarize the reader with Giulia, a main character in his story. Giulia, sadly, remains mostly unknown to the reader.

I like Mark. He seems to be honest, sincere, conscientious, introspective and brave. He comes across as self-absorbed in places where he indulges in lengthy rants but I attribute that to his amateur writing skills. Plus, he is a young writer.

What I really liked about Mark is he does not confine himself to the typical male stereotypes. He does not hesitate to express his feelings sincerely. He often shows emotion in front of other people, in some cases, even strangers. He is compassionate, caring and nurturing as a father. He also played the role of a stay at home dad for a while and seemed to be very content with it. He seems open minded, which is a great asset for anyone going through a crisis situation in life because it allows them to consider various perspectives to be able to get through the situation effectively. For example, Mark’s struggle with his wife’s refusal to take medicines. He gets frustrated but he also was willing to work harder and dig in further (by reading books on the subject for that matter) to consider his wife’s perspective. I think no matter what happens, people like Mark will be fine in the end. Last but not the least, I could also relate to Mark’s obsession with fitness. He uses fitness as therapy to get through his own stress and negative feelings associated with his wife’s illness and frequent hospitalizations. As someone who often uses fitness as therapy, I can vouch for its effectiveness.

With all that said, Mark is also extremely lucky, as he says so himself at the end of the book. His family and friends are extremely supportive. They are willing to take time from their own lives to help him out. He is able to take time off from his own work to focus solely on himself and his wife. He is able to hire help with his son while taking time off from work. He is able to send his son away to his parents place for several days while his wife is in hospital, so that he can focus on himself too. His mother and his mother in law (he calls her suoc) are willing to take turns to stay with him for a week at a time, flying back and forth from coast to coast or from one end of the world to another, willingly picking up the financial burden associated with it and putting their own lives on hold for him. His siblings and their families take time off from their lives to show support for him. He is really, really, really lucky. Not many people have this kind of support system in place in their lives. Most families around the world do not even understand mental illness to begin with, let alone offering support for their loved ones who are affected by it.

Mental illness, in many cases, is not as black and white as in Guilia’s case. Most commonly, it manifests itself as chronic depression, mood swings, perpetual anxiety, various types of addictions, etc. It may never lead to something as severe as psychotic episodes. The people suffering from these more common forms of mental illness may refuse to even acknowledge the problem, let alone seeking treatment for it. But the effects of it will definitely be felt by their immediate family members in their daily lives and for a more prolonged period of time too, as they continue to retreat into their own self-absorbed worlds. Sometimes these effects get passed on to generations as the people suffering from these conditions continue to live in denial and continue to parent their own children without getting any help for themselves. This is why I feel an open discussion on this subject is very important. The stigma attached to this subject can be removed by people openly sharing their stories of their own personal experiences with this subject. It definitely takes courage but I believe that these personal stories have a lot of power. THIS is the reason why I liked this book despite the average writing skills. ⭐️⭐️⭐️